Friday, March 27, 2020.  Usually I've posted pics by now.  In reality, I'm happy to have made it to our spot.  Actually was simple parking.  Heck, the spaces are gigantic enough.

Hooked up and checked out the damage.  Thank goodness, we've got six months here to get another tire and tire iron.  Went running around to find RV plumbing - not even Camping World carries piping.  No kidding.  These companies try to maintain a monopoly so you have to bring the RV into them.  I didn't realize, but the RV gray pipe is not the same as PVC.  You have to use different glue and everything.  Did a lot of YouTubing.

While Home Depot has signs up about distance - if you have a dog, everyone seems to forget distance.  Xena was the life of the store.  She loves being the "princess."

We stopped at Walmart for groceries.  Unlike Livingston, they have all groceries.  No paper products, but groceries.

Yesterday, while we were pulling in, Gypsy (and Bubbles) from Livingston came by.  Gypsy remembered Xena immediately, and vice versa.

I love this space!  I sit out at night, and just look at the sky.  We've put up bird feeders.  Settling in.

This is the yard behind us.  People walk their dogs up and down this "alley."

This is directly behind us.  I promise to take more photos today, when I walk Xena around this afternoon.

I feel I made a great decision on moving, at a great time.  I can definitely be more comfortable here.  AND when the beaches open again, I'll be ready!
Posted by CarolAndXena at 1:37 PM No comments:

Thursday, March 26, 2020, we headed out from Livingston, Texas, where we had lived since September of 2019.  Since we had "used" our allotted six months stay, we had made reservations for Rainbow Plantation in Summerdale, Alabama.  We had stayed in Alabama when I made my first post here in 2019.  Such different times, however.

We came back to Rainbow Plantation because we had loved it.  Every morning trips to the beach, going to the parks.  However, this year, we would be under stay-in-place orders.

We headed out, not knowing what to expect through the trip.  Traffic was almost non-existent in Texas.  Numerous semi's, a couple of RV's, even fewer cars.  Stopped and got gas.  The store had a sign up regarding number of people permitted in at one time.  Once inside, pylons separated everyone at six feet.  Store signs also mentioned that they would be closed by 8:00 p.m..

I, actually, enjoyed the drive.  Used cruise control in the far right lane, let all the big guys zoom by in the left lane.  Became almost boring - until we got to Baton Rouge, Louisiana.  You would've thought we were in a different country.  Normal rush hour traffic, cars zooming in and out of lanes.

I really did not want to stop in Louisiana for fuel.  My crazy brain could just see all the corona germs jumping around the gas stop.  Hubby wore a glove while pumping.  I didn't use the restroom, or go in the store.

We had to stop a second time for gas.  I was almost shaking.  All we could find was small, in the mall parking lot, gas stations.  We argued about whether I could make it in and out.  Bam, I tore up the sewer outlet.  Didn't even stay to fill up.  Took forever to find a way out of the station.

Finally, right before arriving in Mississippi, we got gas.  As I pulled out, got to the on ramp, someone yelled and honked - "you've got a flat."  I was - what's next!!!???

We pulled over right at the exit, in the big striped spot.  Well, I didn't know that we do not have any tire iron.  Yup, that's right.  Not one.  Not for the truck.  Not for the RV.  I hadn't bought any "help" kind of insurance.  I figured we'd use the Texas DOT phone number.   But we're not in Texas.

I can get mean in situations.  Hubby asks what to do.  I said stand out there and look at it.  Yes, very mean.  But I was very angry.  I looked up Louisiana's help line.  They were sending someone out.  For FYI, try calling any states DOT for simple help.  They'll help with tires, jump starts, simple problems, for free.

But him standing there looking at it actually helped.  A very nice young gentleman stopped to help.  And he had all kinds of tire tools, including a jack.  I canceled the DOT.

As I drove away, I gave God a big "thank you."  I called Rainbow Plantation to let them know we were running late.  I had another two hours of driving to go.
Posted by CarolAndXena at 12:55 PM No comments:

As the mosquitoes are beginning to emerge, thoughts go to how to keep them from eating me alive.  Bingo - have my prayers been answered?  Going to look into this Lemongrass, which really does appear to be a miracle plant. 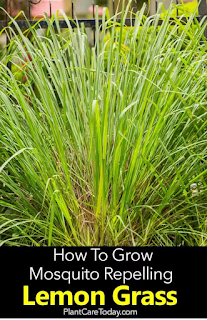 Will report where I find it, and how it works.

Posted by CarolAndXena at 11:31 AM No comments:

We have been RV'ing fulltime for a year and a half now.  We are Escapees Members, meaning we get deals on camping sites, and all things RV, through this membership.  Currently sitting in Livingston, Texas, getting address changed, and resident paperwork complete.  Since we are already Texans, we did not have the issues many out of state folks face.

Now,  we are ready to move on.  The prior year we moved every two weeks from state/national park to state/national park.  At these parks your maximum stay is, normally, two weeks.  We are now "staying put" for at least six months at a time.  It allows me to keep my Etsy/website moving smoother.  It also means we get to enjoy more of the local sites, at less of a rush.

As I refresh this blog with new journeys and sites, I will also add photos and text from places visited within the last year.  Our first adventure is Xena's trip to the Woodlands Bear Branch Dog Park. 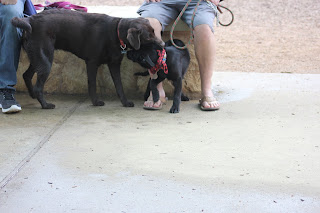 Some friends we met.

Stay tuned for pet friendly venues and trips AND RV fun and news.


Posted by CarolAndXena at 11:04 AM No comments:

Where have we been?

Here, there, and everywhere.  We have been for the last six months in Livingston, Texas.  An Escapee's Park called Rainbow's End.  Met so many wonderful people - and pets!  Xena has grown up (in size, not attitude), and we have both been discovering new things.  Trying to find a path where we can both contribute to the world at large.  I've been doing a lot of sublimation planning, and searching for new and amazing products for our furbabies.

Before locating in Livingston, we had traveled to Colorado, Illinois, and Alabama -- and it's only been a year and a half!  During this time, we did lose our original furbaby, Suzie.  She was a 3 year old malamute/husky from a puppy mill (she was a mama).  She died in my arms from kidney failure.

After swearing off furbabies (of course), Xena stepped in and stole my heart.  I don't know how I would've survived without her.
Posted by CarolAndXena at 6:10 PM No comments: 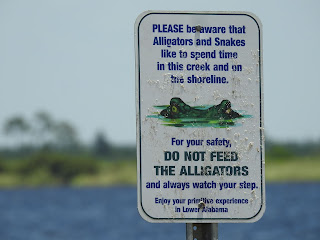 Do not feed the alligators?  I don't think we needed to be told that.  But I did watch my puppies back for any eyes peeping out of the water.  One person had said they'd seen an alligator, but that was the only person. 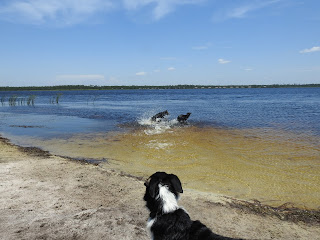 Xena met a couple of friends.  She actually acknowledged them - and then watched them in the water.  We could not get her to go in, even along the shore.  Then the owner of one of these dogs walked into the water.  Of course, Xena followed him.  We were like parents watching their kid take their first steps!

She finally took the complete plunge.  She could not get enough.  She was actually digging holes in the sand under the water! 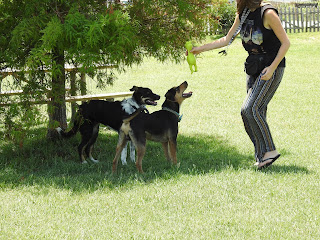 Of course, she makes human friends wherever she goes.

We definitely approve of the Gulf Shores dog park.  We'll be here again and again!  A lot of shade areas for the people.  A small agility course.  And, of course, the lake.  BUT they did not have any source of water - so bring your own. 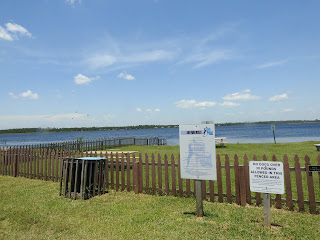 Posted by CarolAndXena at 3:51 PM No comments:

Sweet Home Alabama, well, I don't know about that.  As usual, bad weather followed us here.  Tropical Storm Barry found us, and was nice enough to give us a full days of rain. 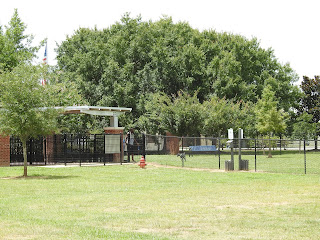 Our first "field trip" was to the Foley Dog Park, in Foley Alabama.  Right in downtown Foley, it was a nice park.  Xena is still not quite a social butterfly.  She loves people, but doesn't quite know about dogs. 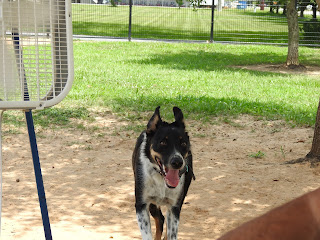 The seating area had box fans.  There was a large dog and small dog area. 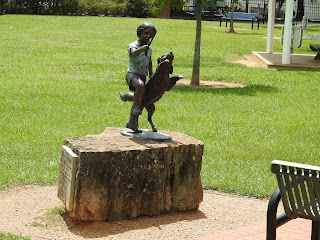 Overall, Xena gives it a 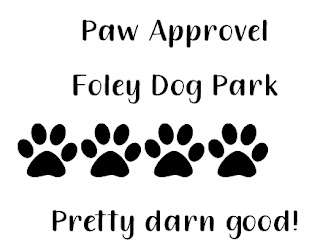 Posted by CarolAndXena at 3:29 PM No comments:

CarolAndXena
Come along with Xena and I as we journey to various states and dog parks. I've been a crafter for a couple of decades now, and have decided to take it on the road.